The Day Home Depot Ran Out of Projects (Or, How to Deal With Disappointment) 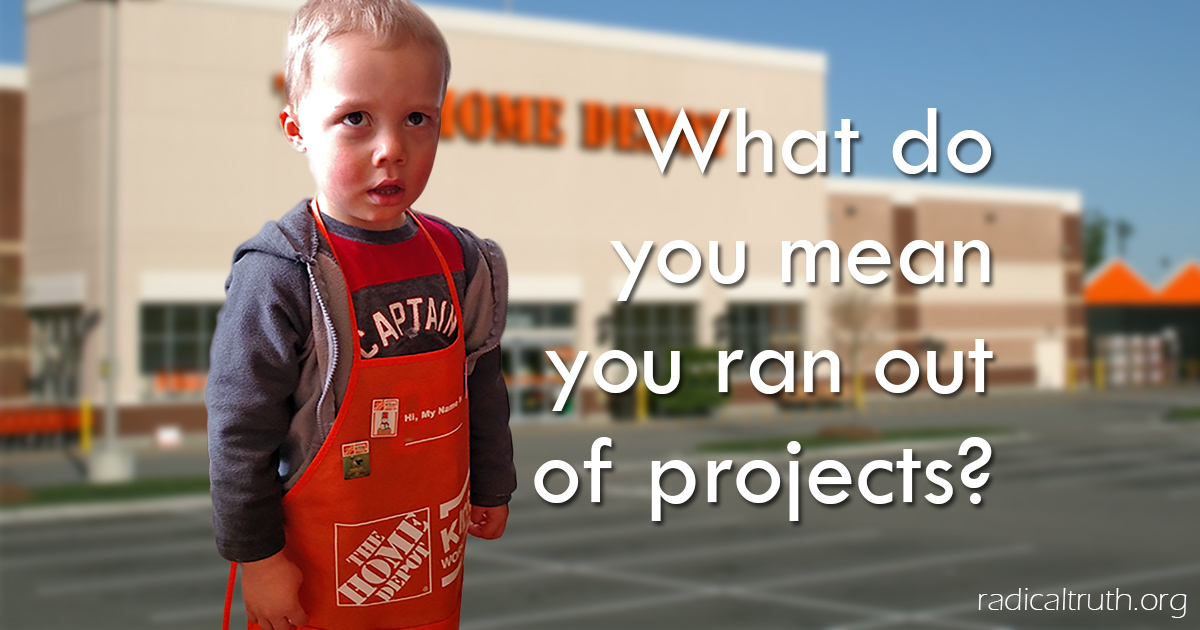 I love Home Depot. Before I had kids, it was just another home improvement store that happened to be a few miles closer than its competitor. But now, we’ve discovered their Saturday morning Kids Workshop. For my two-year-old son, it is a magical wonderland of manly things and monthly little kid construction projects. That is, until last week.

Last Saturday was the day Home Depot ran out of projects. With a two-year-old and a two-month-old to get ready, we arrived a little later than usual at 10:25 am. But Home Depot’s website says Kids Workshop runs from 9 am until noon and I’ve seen them bring out backup projects after 11 am. So we should be fine, right?

In the parking lot, I dressed my little boy in his crisp Home Depot apron and he was ecstatic. As he grinned from ear to ear, we walked into the store pushing his little sister in a stroller. As we walked up to the project table to begin working together, we heard three devastating words, “we ran out.” That’s fine, are there any backup projects you could bring out? “No, you should get here earlier next time.” Thanks, I thought, what a great tip.

My son didn’t understand what was going on or the brief conversation he overheard. So I explained that they were out of projects and we would just return next month. A sudden sadness washed over his face as he realized what was happening. We weren’t doing a project at Home Depot.

We walked to the car and he struggled to fight back the disappointment. He wanted to go back and try again. Surely there were projects in there, he saw other kids putting together toy cars and they looked so happy!

As I thought about what to do next, I realized this could be a great teaching moment on disappointment. We could go home, I would continue to explain that sometimes life doesn’t work out the way you want and we have to learn to be OK with that.

Then again, he’s two-years-old. Maybe I should make it up to him since I'm the one who promised a fun morning at Home Depot. I decided to turn it around and save the lesson on disappointment for another day.

"Tell you what, how about we go to the play area at Chick-fil-A then work on a project at home?" In the cutest two-year-old voice imaginable, he said, "but you don't have any projects at home!" (If you can imagine the “you sneaky mom” toddler saying this, that’s about right.)

"I can create a project at home and we can go play at Chick-fil-A now, how does that sound?" He offered a hopeful, but still disappointed, "OK." 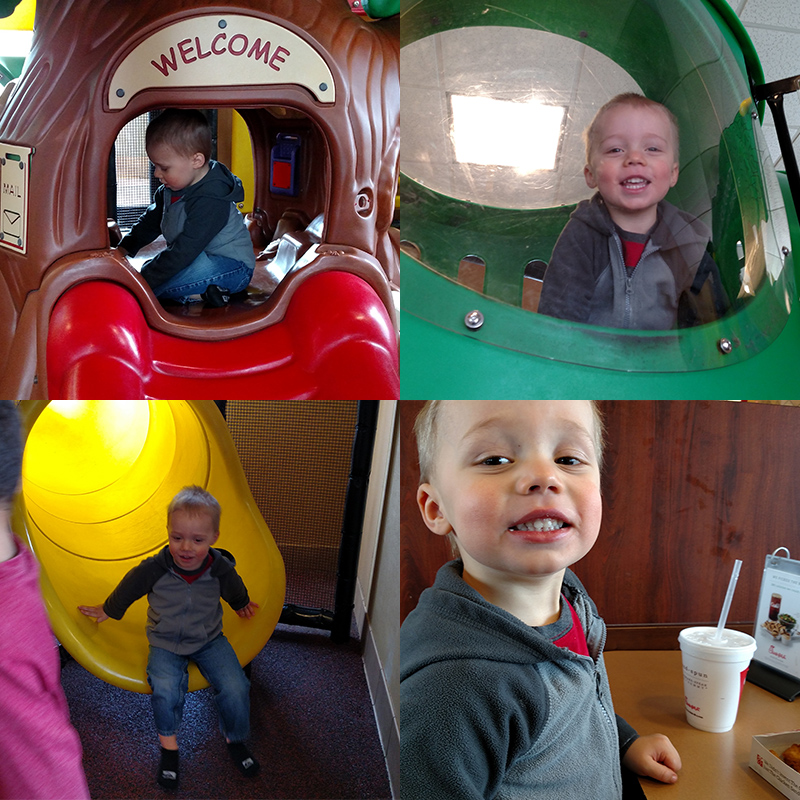 At the play area, he warmed up and romped around the slides. One of his favorite things is simply talking with other kids. He asked if we could also get some food and we had a great father-son lunch out (with baby sister sleeping through it all). In all the fun, I was sure he had moved on from the project, but no! After lunch, he asked, “can we go to Home Depot now and do a project together?”

I managed to convince him that we could do a project at home and we spent the hour before nap assembling a little train from… Chick-fil-A. (What a cool restaurant!) 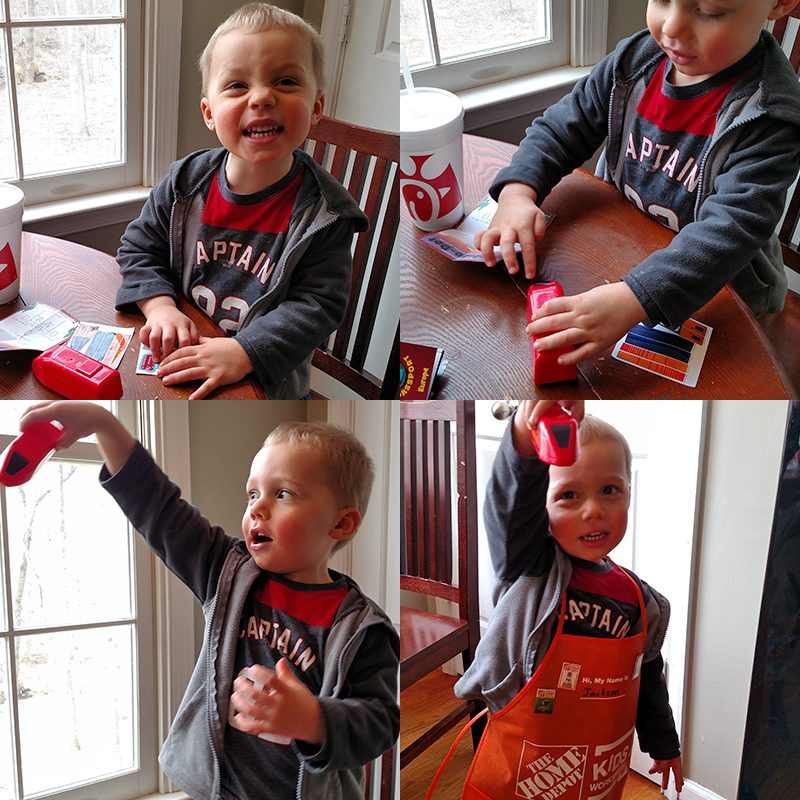 As my son beamed with pride and flew what he thought was a rocket ship through the sky, I realized something. I actually did teach my son how to handle disappointment that day. I "redirected." It's an important skill all of us need to master. You might also call it "moving on."

When something really disappoints us we have the unfortunate tendency to wallow. We can sulk and moan and turn what is really a #firstworldproblem into a #worstdayever.

What we should do is redirect and move on. I used to teach it to my missions teams as, "recalculating." When you use a GPS for directions and make a wrong turn, the device will say something like "recalculating" and figure out a new path almost instantly. Gone are the days of pulling off the road and sitting for a while trying to leaf through a giant map book looking for the right roads (yes, I am that old). Thanks to the recalculating of a GPS, we simply follow the new path to get back on track. 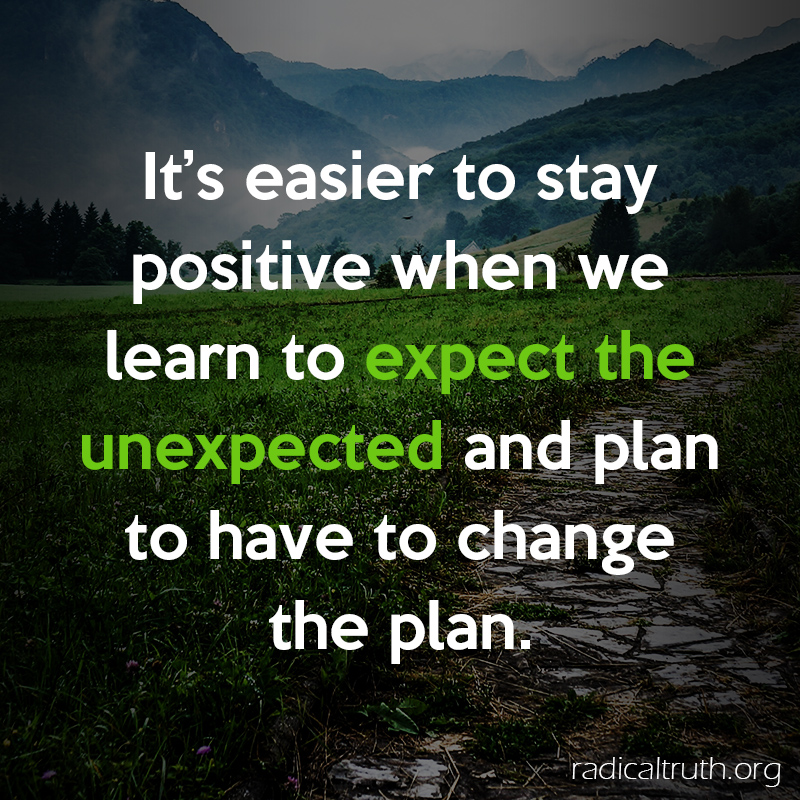 “Recalculating” became a buzzword on many of our mission trips. When something didn't go as planned or expected, we adapted and moved on. I didn't even need to bring it up. All I had to say was, "well team, we hit a snag" and they would yell out "recalculating!"

It's easier to stay positive when you learn to expect the unexpected and plan to have to change the plan.

Sometimes a life change is big enough that we need to stop and reflect for a while. When a loved one dies, we lose a job, or we find out someone close to us broke our trust, we need to slow down and take the time to process and heal. But too often we are easily distracted and discouraged by much smaller things. 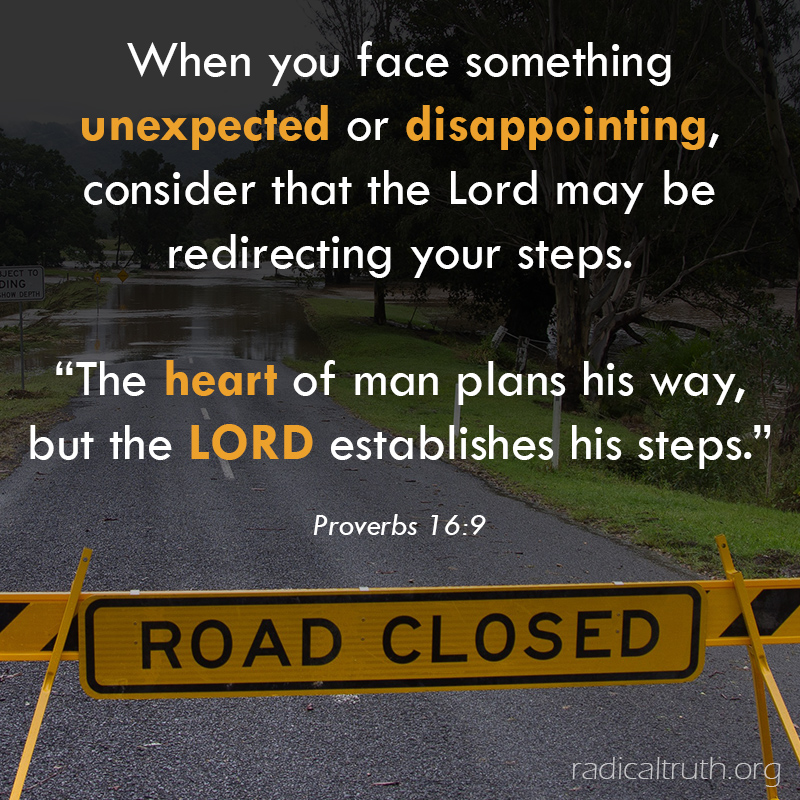 In the disappointments of everyday life, we need to learn to redirect and move on. Think like a GPS and tell yourself, "it's OK, I’m recalculating!" then plan a new direction. You may find that your new path is better than your old. Perhaps, you'll find that God allowed your disappointment for a specific purpose. Either way, you'll be much more joyful.

The Bible tells us to be wise planners but also to understand that plans may change suddenly and without our intention. The next time you face something unexpected or disappointing, consider that the Lord may be redirecting your steps.

I love Home Depot. Before I had kids, it was just another home improvement store that happened to be a few miles closer than its competitor. But now, we’ve discovered their Saturday morning Kids Workshop. To my two-year-old son, they are a magical wonderland of manly things and monthly little construction projects. That is, until last week.
blog comments powered by DISQUS back to top