Share on Facebook
Share on Twitter
Share on Google+
Share on Google+
Share on LinkedIn
Pin It!
Some lessons are easy to learn but hard to master. One that has been a constant help for me is to “pick my battles.” Some people think that every time someone upsets them they should make a formal accusation and, at all costs, win their argument. But God's Word has great principles for conflict resolution that fly in the face of those argumentative instincts.

Matthew 18:15-17 (NLT)
If another believer sins against you, go privately and point out the offense. If the other person listens and confesses it, you have won that person back. But if you are unsuccessful, take one or two others with you and go back again, so that everything you say may be confirmed by two or three witnesses. If the person still refuses to listen, take your case to the church. Then if he or she won’t accept the church’s decision, treat that person as a pagan or a corrupt tax collector.
The Matthew 18 principle is a fantastic method for dealing with conflict. From it we learn that we should not gossip about an offense, rather, we should approach the offender one-on-one and address the problem with humility.

But some Christians have interpreted this principle as their personal excuse to take up an offense with anything that bothers them. This is especially true in marriage where, the longer a couple is married, the more simple annoyances can fester into serious conflicts. Issues which would have seemed insignificant while dating, for instance, leaving crumbs on the table, neglecting to replace the toilet paper, or (cue gasp) neglecting to lower the toilet seat, can become category-five storms after years of pent up frustration.

Picking your battles means learning to deal with these annoyances while not blowing them out of proportion. We have to learn when to take up our sword and when to simply let an offense slide. Proverbs 19:11 says, “A person’s wisdom makes him slow to anger, and it is his glory to overlook an offense (NET).”

The word for “overlook” literally means to “pass over.” In other words, it is glorious for us to “pass over” the offense of someone else. Like a runner clearing hurdles on a set path, we should seek to jump over the hurdles of minor annoyances inevitable when dealing with people.

When a runner clears a hurdle, he does not look back to examine, reflect, or complain about the hurdle. He continues to run with his focus straight ahead. If we cannot “pass over” an offense and keep from looking back, the offense must be addressed according to the Matthew 18 principle. Here's a graphic to outline the process: 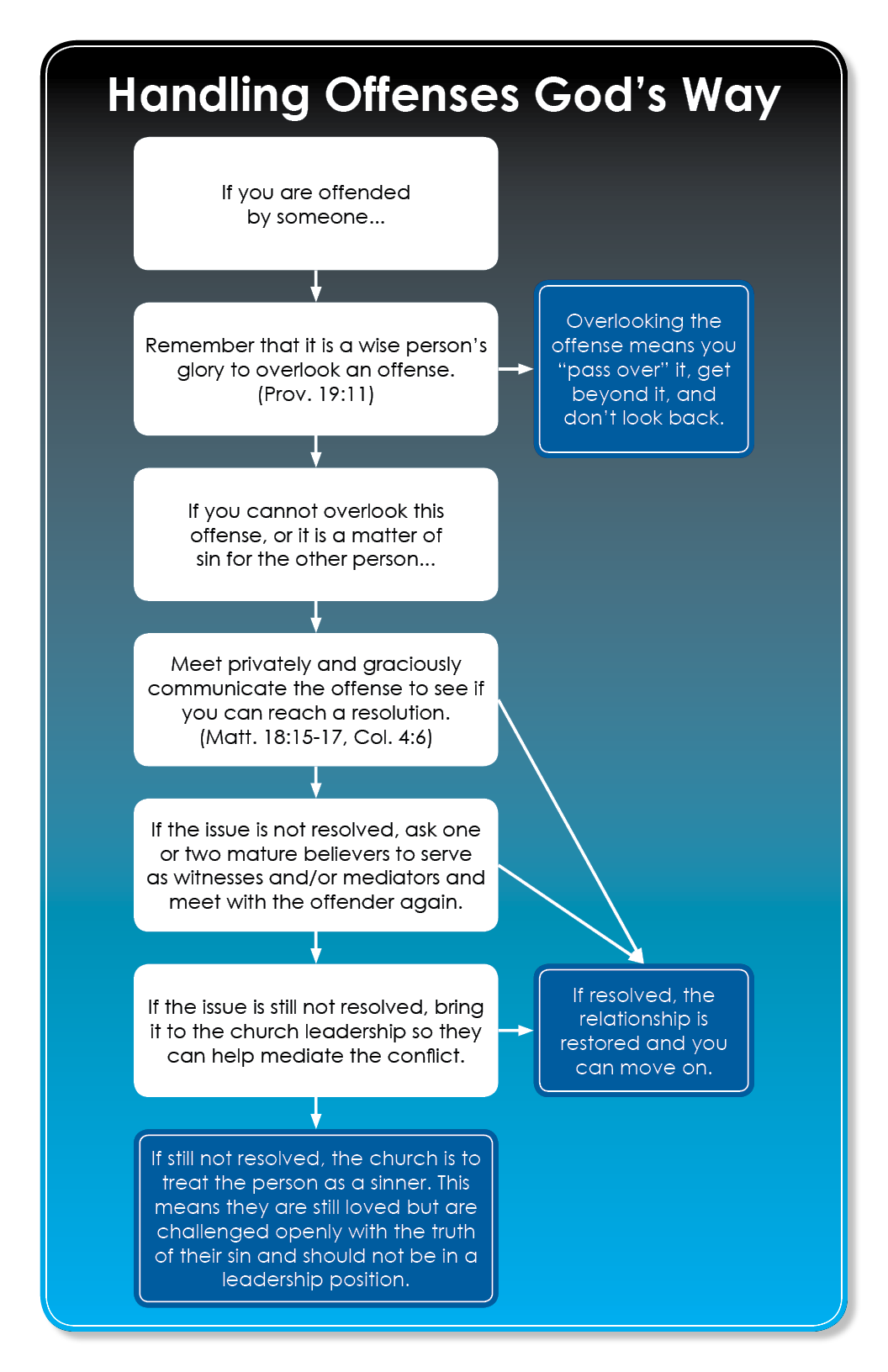