Are Millennials Really Abandoning the Church?

While I appreciate a lot of what Giglio does and especially his heart for this demographic, I’m not sure I buy his evidence for two reasons. First, Passion events are unique attractions that will draw a crowd anywhere regardless of the spiritual position or maturity of the attendees. Any major Christian event that is well produced and entertaining will have a large attendance and could include vast numbers of nonbelievers who are simply there for a good time, think they are believers and are not, or are trying to become acceptable to God through their attending a Christian event. I don’t think that makes up the majority of Passion attenders, but I think it is reason enough to not consider a large Passion event evidence of Christianity growing among millennials. 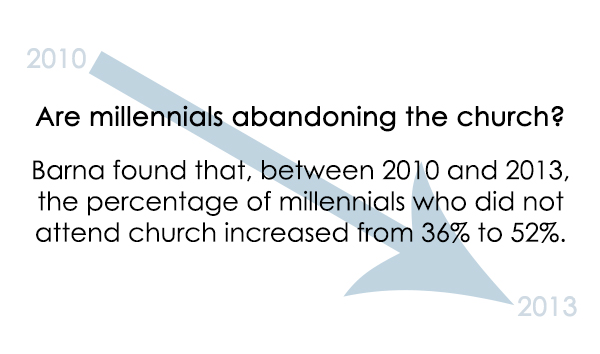 Second, Barna’s research seems to indicate the opposite and their methodology does not rely on mainstream churches which are on the radar. Barna asked 18-29 year olds through telephone and internet surveys if they attended a church. Even if these young adults attended a new or nonstandard church, they would have said “yes.” Barna found that, between 2010 and 2013, the percentage of millennials who did not attend church increased from 36% to 52%.

To be fair, surveys are not infallible. Nor will they provide us with the answer to the problem. I suggest that the answer is summed up in authenticity. Young people see hypocrisy in churches, interpret this as the absence of real truth, and they abandon them.

Many of us, myself included, are finding ourselves increasingly drawn to high church traditions – Catholicism, Eastern Orthodoxy, the Episcopal Church, etc. – precisely because the ancient forms of liturgy seem so unpretentious, so unconcerned with being “cool,” and we find that refreshingly authentic.

While I do not believe most millennial Christians are seeking liturgical churches (a few are), I think the motivation expressed is the overarching reason millennials are abandoning the church in droves. Millennials may give a variety of explanations for leaving, but they all seem to fall under the authenticity umbrella.

To put it another way, our churches tend to make Christians and not disciples. I can’t really say it any better than in the message below:

We are Christians, we belong to Christ, but if we stop at the identity and neglect the personal discipleship responsibility our faith appears dead. This is what young people see. They see their parents who argue and yell at home but fake a great relationship at church. They see older Christians who judge, focusing on the superficial and not at all valuing their perspectives. They see pastors who talk out of both sides of their mouths. They see Christians who are hypocrites in how they speak and how they act. When they don't see authentic faith from true disciples, they learn that church is fake. Church is where people go to put on a mask. Church is a hospital where all the patients are pretending that nothing is wrong with them, and they are fine just the way they are.

This trend will not be curbed by large one day Christian crusades. Those have their place and are certainly a net positive. We will only see a major change when Christians start acting like disciples and intentionally pursue disciple-making relationships with younger believers. This will drive us into authentic and transparent relationships and counter the hypocrisy destroying our churches.