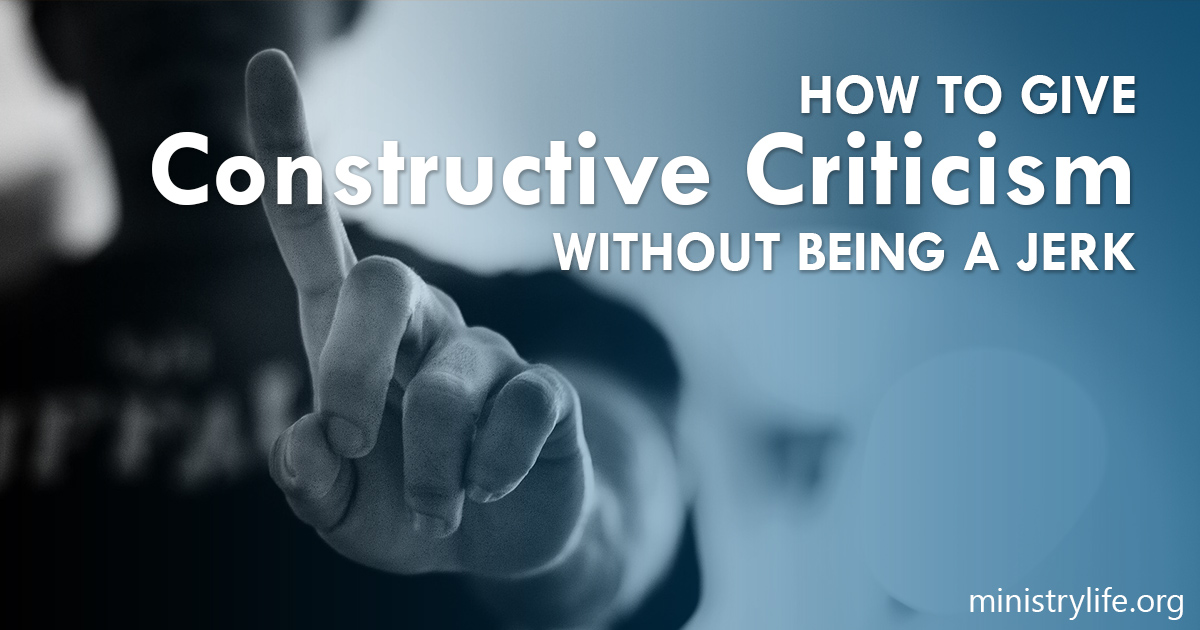 Constructive criticism is important! If there were no negative feedback in our lives we would never know our weaknesses and learn where we need to grow. There is an art and a science to delivering criticism well, however.

I remember one time long ago when I was criticized in front of other people for a point I made while preaching. The criticism was offered without humility and without seeking to understand my perspective. The reality was, this person did about 5 minutes of research on the topic while I invested about 30 hours in deep study. I had pages of notes and citations from many scholars to back my conclusion. But they didn’t ask about any of that, they simply wanted to point out that I was wrong and they were right, regardless of the facts.

That kind of callous criticism makes people recoil not grow. It seeks to make the critic the expert and the criticised the inferior.

Is your goal to truly help the other person? Or do you simply want to prove you were right? Do you want them to learn and grow? Or do you just enjoy sharing your personal opinions?

Here’s a big one: Will you be thrilled if you find out you were mistaken and they knew more about the situation than you did? Or will you feel offended if they don’t agree with your critique?

If your goal is to people grow, your constructive comments will sound very different than most criticism.

Do nothing from rivalry or conceit, but in humility count others more significant than yourselves. Let each of you look not only to his own interests, but also to the interests of others.

Constructive criticism always seeks to improve the other person, not to air grievances or vent. A critic loves to point out problems and usually does so with arrogance. A coach approaches problems with humility, often because they have made the same mistakes in the past. A coach doesn’t seek to make the other person feel inferior. Coaches point people to what they could become if they work on the rough spots.

Critics dwell in the past. Coaches give hope for the future.

And let us consider how to stir up one another to love and good works.

“Do you mind if I share an observation with you? I think you’re doing a great job and look forward to seeing more from you in the future. From my perspective, however, it seemed like this should have been communicated differently. Did I understand you correctly? Was that what you were trying to communicate?”

Anybody can spot problems and make a stink about them. Constructive criticism doesn’t stop with the problem but offers a better way.

All Scripture is breathed out by God and profitable for teaching, for reproof, for correction, and for training in righteousness.

“A few years ago I did something similar. It turned out to cause some problems because I didn’t realize how people were perceiving my actions. Can I suggest you consider this method instead?”

Make sure the person understands exactly what it is you are criticizing. Generalizations accomplish nothing. Details allow people to know exactly where they need to improve.

If one gives an answer before he hears, it is his folly and shame.

“If I understood you correctly, this is what you were trying to accomplish, correct? Can I share how this came across to me? Here’s what I heard…”

When constructive criticism is necessary, always leave people with positive affirmation. Give them an insight into their strengths and help them see what they do well.

Build their confidence by encouraging them so that, as much as possible, they don’t walk away deflated but inspired to do better.

One way to do this is (and I hesitate to mention it because some people use it very poorly!) is the “criticism sandwich.”

This is a great way to bring up problems. However, make certain you are sincere in your affirmation or the whole thing will come out as disingenuous and possibly even manipulative.

Rather, speaking the truth in love, we are to grow up in every way into him who is the head, into Christ.

“You are doing an awesome job in these specific areas... I did notice one thing I wanted to bring to your attention, and maybe there’s a reason you did it this way... Thanks so much for what you’re doing, though. You are clearly gifted in these areas…”

6. Invest before you inspect

People are like bank accounts: You cannot attempt to withdraw more than you have invested without going into debt.

As much as you can, you should earn the right to offer constructive criticism. For you to expect more of others and offer correction, you must first invest in them.

Here’s the fine print: It takes five investments to equal one withdrawal.

Dr. John Gottman led a team that studied positive-to-negative ratios of interaction in marriages. They found that it took about five positive interactions to make up for a single negative one. That five-to-one rule is called “the magic ratio.”

Using their findings, the team predicted whether 700 newlywed couples would stay together or divorce by scoring their positive and negative interactions in one 15-minute conversation between each husband and wife. Ten years later, the follow-up revealed that they had predicted divorce with 94 percent accuracy.